B.C University gets unique vending machine
It's a short story dispenser and it's creating a lot of buzz at Capilano University! Isabelle Raghem is speaking with excited students.
Read the article
Short Story Dispenser   Universities/Education   TV

Commuters in one of London's most important financial centers will now be treated to a dose of literature on their way to work, as three Short Story Dispensers were installed on Thursday, the first of their kind in the U.K.
In their first day, the Short Story Dispensers are already proving a hit with commuters at Canary Wharf, one of London's busiest Tube stations in the heart of the city's financial district.
Read the article
TV   Transport 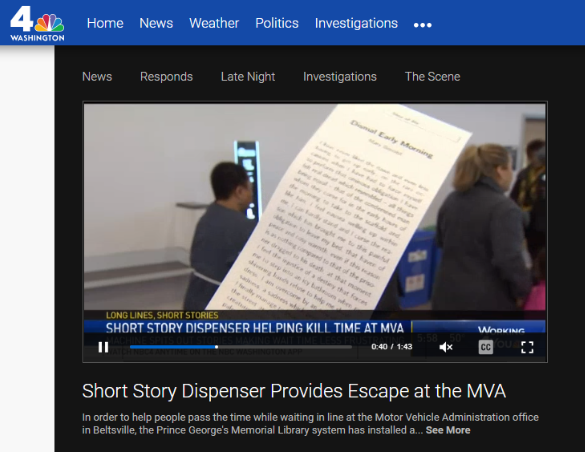 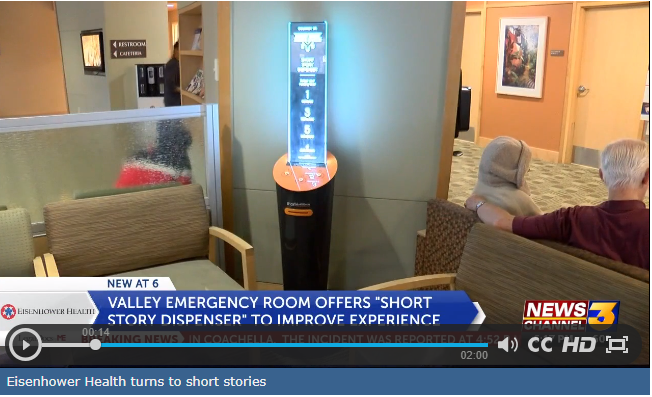 Printed short stories inspire and uplift
RANCHO MIRAGE, Calif. - The "Short Story Dispenser" from the company "Short Edition" sits in a corner of the emergency room at Eisenhower Health in Rancho Mirage. At the push of a button, it dispenses free, printed stories, in different lengths. The reads that last one minute, three minutes, and five minutes. The device was recently donated by the valley non-profit Rancho Mirage Writers Festival.
Read the article
TV 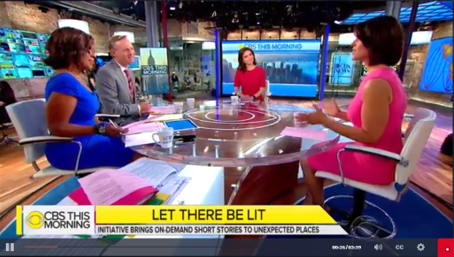 Reading for pleasure is at an all-time low in the U.S. A recent government report revealed Americans read for fun about 17 minutes each day. "CBS This Morning: Saturday" co-host Dana Jacobson reports on a unique program that brings reading to unexpected places.

PHILADELPHIA (CBS) — Technology meets with tradition in the form of a machine being used by the Free Library of Philadelphia, which is aimed at getting more people to read.
Think of this machine as an ATM for free stories.
“It has one, three, and five-minute stories. You press the button, prints out a short story on essentially receipt paper, and it’s yours to walk away with for free and read, and enjoy,” said Andrew Nurkin with the Free Library.

Short Story kiosk unveiled - Columbus has now a lovely way to get short stories into the hands of kids. Columbus City School says the Short Story Kiosks are the first in the midwest...
Read the article
Short Story Dispenser   Universities/Education   TV   Other countries

The Edmonton International Airport is featuring works by local authors from a short story dispenser for travellers waiting for their flights. The dispenser, from a France-based company Short Edition, is a thin tower with three buttons, indicating a one minute, three minute and five minute story – when one of the buttons is pushed, a short story is printed on receipt paper. EIA is the first Canadian airport location to use the machine, and the second in the world (after Lyon–Saint-Exupéry Airport, in France).
Read the article
Short Edition   Short Story Dispenser   Best Of   TV

[ US ] West Palm's short story dispenser will surprise and delight you

What happens when you’ve exhausted the shelves at the Mandel or you’ve lost the charger to your Kindle?

At Subculture on Clematis St. in West Palm Beach, there’s no need to resort to mindless newsfeed scrolling. With the press of a button you can get your fix from a short story that takes your mind away from the tedious tasks of everyday life for at least a minute, or five.