[US] BART short story program proving to be a success

BAY AREA - For the past year and a half, BART has actively worked to convert its ridership into a readership with a free in-station short story dispensing system at a handful of stations.

Launched in January 2021, the Short Story Dispenser kiosks have delivered 17,198 short stories to riders at the Richmond, Fruitvale, Balboa Park and Pleasant Hill stations, according to BART officials.

The stories are written to be read within one, three or five minutes and are printed by the no-touch kiosks on recyclable paper, BART officials said in a news release Monday.

"What pushed us to really move this project forward is that the Bay Area has such a wealth of bookstores, readers and writers," said BART Art Program Manager Jennifer Easton.

Do you ever get to the train station and realize you forgot to bring something to read? Yes, we all have our phones, but many of us still like to go old school and read something printed.

Well, there's a kiosk for that. In the San Francisco Bay Area, at least. 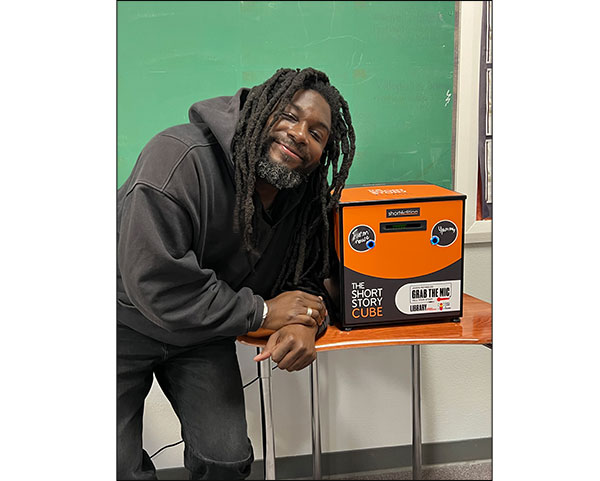 Reynolds demonstrated how to use the Short Story Cube at Dutton/Brady Junior High and High School in Dutton on May 24.

For the first time since the pandemic started, author Jason Reynolds took to the road for his first in-person tour in his role as the National Ambassador for Young People’s Literature, a program of the Library of Congress and Every Child a Reader.
Reynolds has held the position since 2020, and he headed to Montana last month to restart his in-person school visits. The tour, under Reynolds’s Grab the Mic: Tell Your Story platform, was in collaboration with digital publisher Short Edition to provide Short Story Cubes, devices that allow students to create, edit, and print stories of their own making. We’ve gathered a selection of photos from the events.

[US] SEPTA stations get makeover for reading campaign 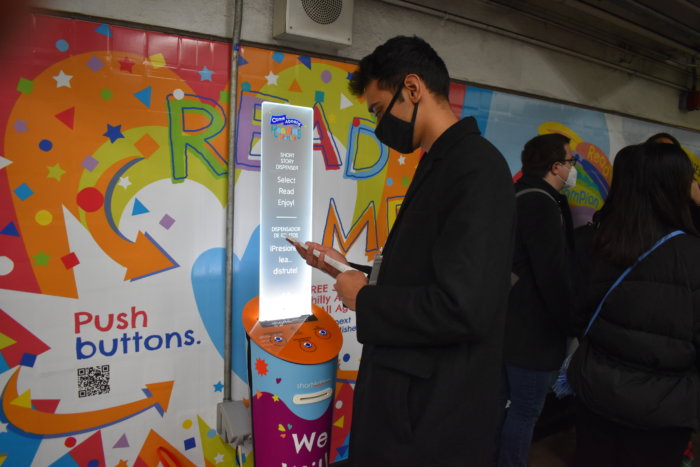 Underground, at the Broad Street Line’s Tasker-Morris station in South Philadelphia, there’s now a mini-library. Riders, by placing their hand over touchless buttons, can now get free short stories, printed on store receipt-like paper. Many of the tales were written by local students.

The kiosks, which are also at the BSL’s Erie station, are part of a campaign unveiled Wednesday to engage kids and families taking SEPTA — and, ultimately, to boost literacy levels among the city’s children.

San Francisco BART wants to get riders back with short stories

[US] A Train Trip With A Story on the Side In unassuming corners of metro and train stations in cities all over the world, beyond the ticket machines and behind the throngs of people, there are vending machines that spit out stories. Even though I’ve apparently walked past one of the short story dispensers installed in four Bay Area Rapid Transit stations several times, I never knew they existed – until last week. 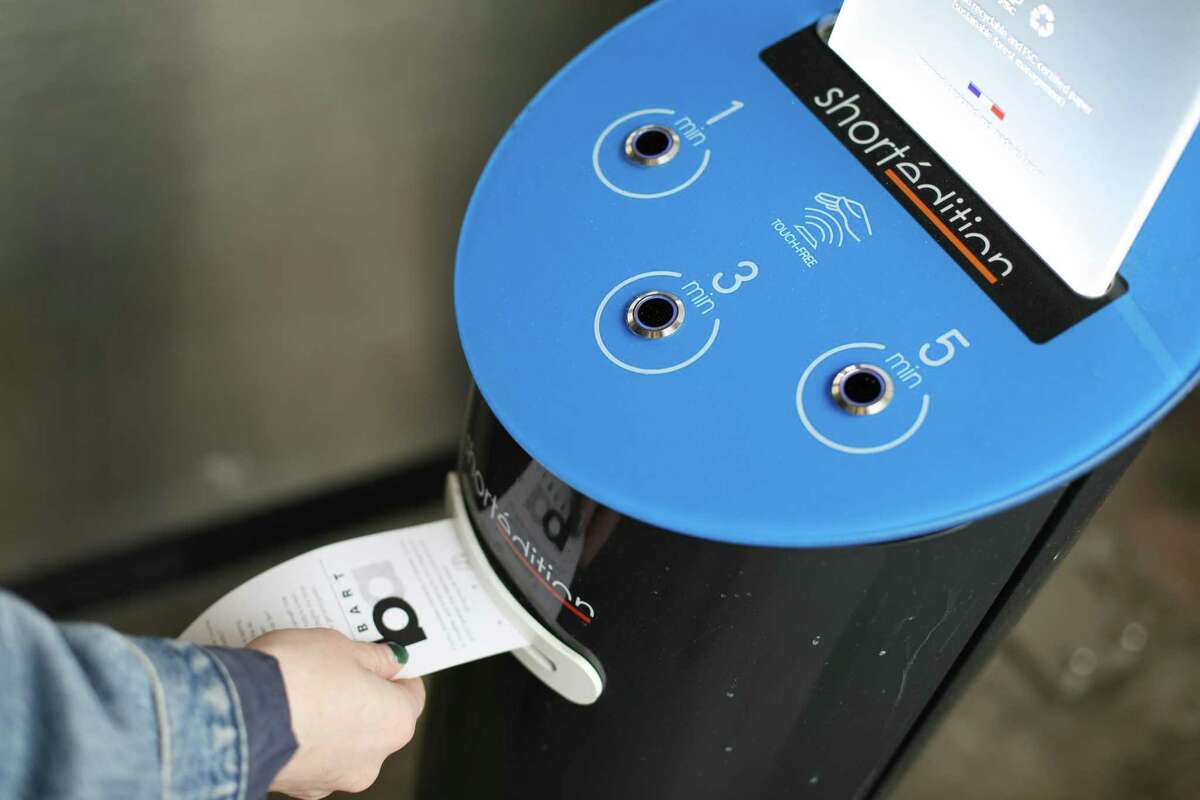 Rapid transit riders with a literary bent in San Francisco can compete for a $200 honorarium and the chance to have their stories dispensed in the system's kiosks, according to a press release.
The Bay Area Rapid Transit, which offers riders short stories dispensed from dispensers at certain transit stations, has called for entries for its first short story fiction contest, called "BART Lines," in celebration of the transit system's 50th anniversary. The Short Édition fiction dispensers print out stories that take one, three or five minutes to read. Courtesy BART / BART

In an attempt to regain attention after a pandemic ridership drop, BART is willing to try anything — including commissioning new literary works.

The transit agency has started soliciting entries for a short fiction contest, the finalists of which will be available via story dispensers on BART platforms to be printed and read during a train ride home.

“(People) don’t think about BART and art. We’re trying to change that,” said BART Chief Communications Officer Alicia Trost. “So many transit systems across the world have beautiful art, and we’re trying to find ways we can afford right now to bring art in the stations.

[US] Stories take flight at the Eugene airport 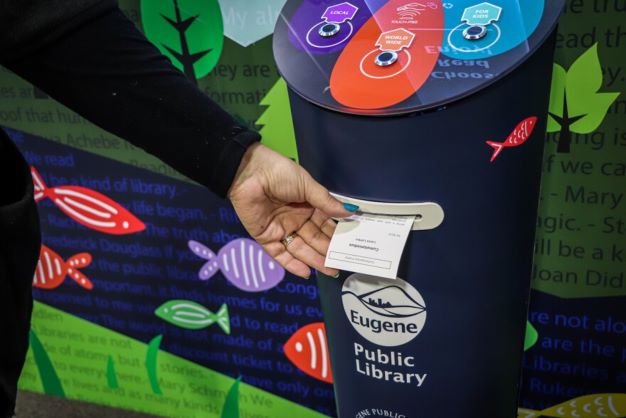 The library can change the dispenser's categories and the story content over time. City Of Eugene

The Eugene Airport worked with another city entity recently to install a dispenser at the top of the escalator. No, it’s not for hand sanitizer. It’s for stories. The Eugene Public Library Foundation funded the dispenser, which prints short stories on wide, recycled receipt paper. Will O’Hearn is Director of Library Services.
He told KLCC, “It’s touch-less buttons, so you just wave your hand over one of the three areas, one says ‘local’ and that’s purple, and then there’s a red one that says ‘world-wide,’ and then there’s one for kids that’s kind of a bluish green.” PHILADELPHIA (WPVI) -- While kids are commuting with their parents, SEPTA hopes families will use that time to discover the joy of reading. They kicked off the colorful, story-filled literacy campaign Wednesday in South Philadelphia called "Come Aboard the Reading Promise." “On March 5, Planet Word installed D.C.’s first Short Édition Story Dispenser. Located in the museum’s entryway, it provides free access to hundreds of short stories or poems at the touch of a button. 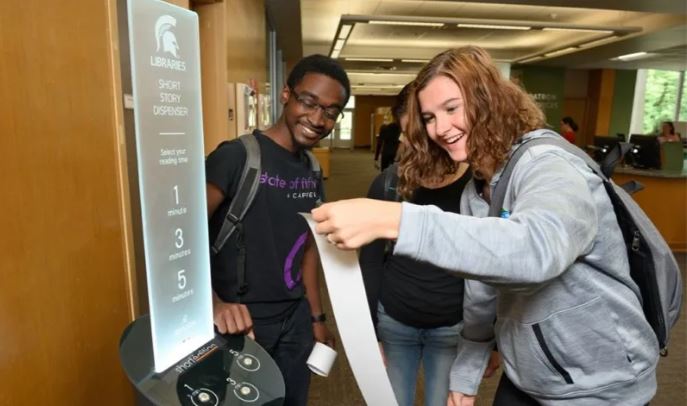