When Isaac's parents told him that they were moving again, he was unhappy – but he was also not surprised.
He and his family had already moved from Birmingham to Kazakhstan to Florida and then to the Aldrin Crater Moon Base, and he was tired of having to pack up and leave his friends behind every time his parents got new jobs.
Isaac put all his things into moving crates... his books, his paint set, his X-Station with Virtual Reality Module, Mr. Ringo the toy lemur, and of course his Cosmic Challengers action figures. (Isaac had tried to leave some things behind, but his parents made him bring his toothbrush and maths textbooks.)
When everything was packed, Isaac went to meet his friends down by the park zone. Octavia and Bradbury7 had only known Isaac for two years, but they really liked him and were sorry to see him go. 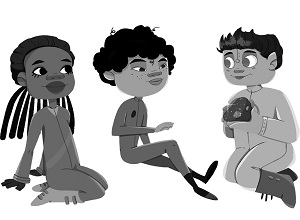 Octavia told him, "Well, at least you're going somewhere exciting... I wish I could go!" Bradbury7 held out his hand and gave Isaac a small piece of metal that shone with all the colours of the rainbow. "I found this meteorite outside," he said in his slow, deep voice. "This meteorite travelled a long way, just like you. I want you to have it."
Isaac didn't know what to say, so he tucked the little rock in the pocket of his astrosuit and hugged his friends goodbye.
Later that day, Isaac's parents loaded up all their boxes and boxes of things, and they were on their way. The journey took many months, but it was only a few days before Isaac was bored. He would normally play Summoner's Quest on his X-Station, but the spaceship was now so far from Earth that the lag was ridiculous.
He then explored the vehicle pod and the oxygen gardens, while wishing that there was someone to play hide-and-seek with. His parents were busy keeping everything running and had no time to play, so for the last part of the journey Isaac mostly stared out of the window looking for asteroids or played the Buccaneer's Booty puzzle game on his SciPad.
Isaac had got all the way up to level 97, ‘Plunder Cove', when they finally arrived on Mars. Once they landed, there was a lot of hustle and bustle as they unpacked their gear and inflated their living domes. (Isaac even got a little pod of his own to live in, which he decorated with posters and stickers.)
Octavia had told him that Mars would be an exciting place to live, but as far as Isaac could tell it was a bit dull. The pink sky was pretty, but outside it was all rocky and dusty, and because they were the first settlers on the planet, there were no other kids to play with. His parents had to set up solar panels to heat their home and Isaac offered to help, but his mum told him that the panels were much too big for him to carry.
"Why don't you go outside to play for a while?" suggested his mum. "Remember to turn on your satnav locator so we know where you are – and put on your oxygen helmet properly so the air doesn't leak out!" "Yes Mum!" Isaac shouted as he put on his helmet, went through the air lock, and stepped out onto the surface of Mars for the first time.
The first thing he discovered was that because gravity on Mars is much weaker than it is on Earth, he could leap tremendously high very easily.
He was soon bouncing over the sand and having a great time. Then he took an extra-long leap over a hill – and stumbled across a hidden cave!
After picking himself up and making sure his astrosuit wasn't damaged, Isaac turned on his lamp and looked curiously around the cave. 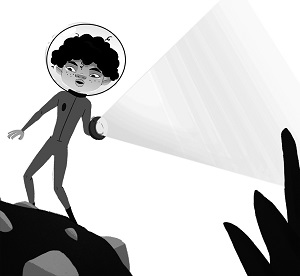 In one corner he found something very peculiar indeed. There were little holes carved into the wall, and each of them had a different mineral or crystal in it. On a big shelf at the bottom was something that looked like a purple blob of slime. Isaac nervously poked the blob, and jumped back in fright when it squeaked! A dozen eyes opened all over the thing – it was alive!
Isaac wanted to run away, back to the safety of his living pod, but then he stopped and had a think. The poor purple blob thing looked very scared, and the crystals and minerals in the holes were probably its collection of special treasures. He had just blundered into a Martian's bedroom and started poking it!
"I'm sorry for being so rude!" Isaac apologised. I didn't mean to come into your very nice home uninvited." He reached into the pocket of his suit and pulled out the shiny meteorite that Bradbury7 had given him. He offered it to the slime-thing and said, "A friend gave this to me – would you like to add it to your collection?"
The Martian opened several more eyes, which grew wider as it stared at the rock. It then extended a slimy tentacle from its body, gently took the meteorite from Isaac's hand, and carefully put it in an empty hole.
The Martian then made an excited bubbling noise like a boiling kettle, which probably meant that it was feeling happy.
"I just moved here from the Moon, and don't have any friends here yet... hey, would you like to play Buccaneer's Booty with me?" Isaac showed the Martian his SciPad, which had an image of a glowing treasure map on its screen. "You have to find the hidden treasure, but don't get caught by the pirates..." Isaac explained.
The little alien peered at the screen with its many eyes, and touched it with a tentacle. It bubbled gently as Isaac began to teach it the game. Maybe Mars wouldn't be so lonely after all – he had already made a friend! 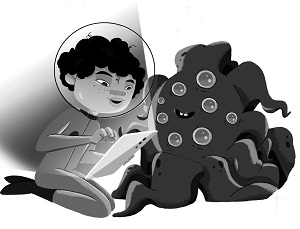 Warning: the following story shows a workshop accident that involves blood. If you're afraid of blood, it might not be the best pick. Try your luck with another story!
Jennie rubbed the sandpape ... [+]

Billie scuffed her flip flops through the dry needles scattered over the Christmas tree lot. Pine scent filled the air. But it felt too hot for Christmas.
"How about this one?" Her mom turned a ... [+]

"This is a fruit of every season which carries the scent of its travels..."
My grandfather often repeated this little phrase to me when he was talking about his clouds. He has the best collection ... [+]