They must have been walking for a good two hours. The lights of the town are far behind them. The houses disappeared long ago. Now they are walking through the forest and night is falling. Tom is getting prickled by the spiky bushes and his legs are aching.

Why had he told his little sister to come with him? Milly is eight, and she can't walk fast. She is frightened of the dark and of the noises in the forest. They have already stopped several times. Milly had heard snakes. Then wild boar and even monsters! In fact the last one was Fox, their dog, who had followed them. Now they are glad that Fox is with them.

Tom gets a flashlight out of his bag. With his finger he traces the route on the map. According to the clues, they can't be very far from their mysterious destination. He looks around him and sees a red cross on the trunk of a big tree. That's the sign he was looking for! At last!

"From here, we have to go right and count thirty steps," Tom says out loud.

Tom and Milly count their steps, with great care.

"Now we have to look for a white cross on a tree trunk," continues Tom.

They spend some time looking at each tree. It's not easy because it's nearly dark. Milly is starting to lose heart. She feels like crying, but she doesn't want her brother to see.

She is pointing at a tree. Tom runs up to his sister and sees a beautiful white cross on the tree trunk. He is so happy that he gives her a big kiss on the cheek.

Quickly, they get the little spade and the small pickaxe out of the backpack. Tom takes the spade, and Milly the pickaxe. Fortunately, the ground in the forest is soft and it's easy to dig with their kid tools. If the map is right, the famous treasure of Hermione is here, right under their feet! Carefully stashed away by the captain, the magnificent collection of pieces of gold and precious jewels has been hidden right here for at least three centuries.

Tom found this map amongst old books in the attic of their new house. Their Mom had gotten a new job, and so they had to move. The new house is big and they have lots of boxes to unpack. Dad put the things to be sorted later in the attic.

Tom loves the attic and he spends a lot of time there. Next to his parents' boxes, he found two big crates. In the first one, he discovered some nails, string and dried-up glue for wood. In the second crate, there were very old books covered in dust and this intriguing map. It was so old that the paper had yellowed from the sun and the corners were all tattered!

He soon realized that there was a secret hidden in the map. He didn't tell anybody about it. Certainly not his parents. Nor his friends at school. He knew very well that they would not believe him. And he preferred to find the hidden treasure on his own. He has spent weeks now preparing his plan. The backpack, the garden tools, everything was ready.

At the last minute, Milly guessed that something was going on. She asked him loads of questions. In the end, he was afraid she might say something to their parents, so he had to tell her his secret. And, of course, she wanted to come with him. So, they decided that today would be the Great Day! They set off right when they got home from school.

Milly is exhausted, she is tired of digging and has sat down on the moss. Once again she feels like crying. Maybe Tom has been telling her lies, and there is no treasure. Perhaps he was teasing her? She puts her arms round Fox's neck and he licks her cheek.

Tom is tired too but he doesn't want to show it. He keeps digging in the soft earth. The earth he has dug is piling up higher and higher. Suddenly, he hears a metallic noise. Tom's spade has just touched something hard! Milly leaps up and takes up her pickaxe again. They start digging as hard as they can. Even Fox helps them.

"Come on, Milly, we're nearly there!" Tom encourages her. 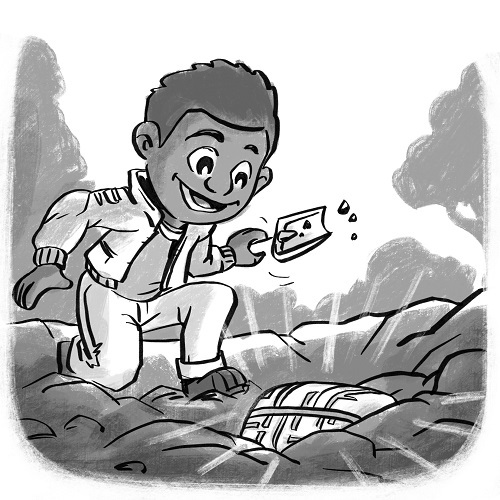 Part of the chest is clearly visible, now they have to get it out of the ground... They pull on the handle on the side, just a little more effort and they'll have it. That's it, the chest is there before their eyes, at last! Unfortunately, it is locked by a heavy chain and even though the chain is old and rusty, it won't budge... They obviously don't have the key to open it, but phew! Tom has got Dad's screwdriver in his bag.

Despite everything, Tom is a bit surprised. This chest is weird. Not at all like he had imagined it. He had pictured a chest like the ones in books about pirates: an old wooden chest, with metal corners and rusty nails, smelling a bit musty. This one does not look at all like a treasure chest. It's more like a kind of... sarcophagus?!

"Tom, are you dreaming? Can you repeat what I have just said? In what year were the Egyptian pyramids finished?"

Mrs. Roberts is standing in front of him with a strict look on her face. She doesn't seem to be joking and she's waiting for him to answer. The rest of the class is staring at Tom. He struggles to understand what's going on. Tom rubs his eyes. Yes, he is indeed at school.

"You can copy out today's lesson ten times to help you wake up, Tom. Don't look so shocked, you look as if you've seen a ghost!"

Mrs. Roberts went back to the board.

How had he managed to fall asleep in a history lesson? Then he remembered reading in bed late last night. An old book he'd found in the attic. An incredible story about a treasure hunt, much more exciting that Mrs. Roberts' lesson!

You are my favorite cousin, and as this is the worst day of my life, you are the only person I can talk to about it. I've been missing you, ever since the vacation at Gran and Grandad's over the ... [+]

Sami was awoken by the buzzing of his third alarm. Was it 8.30 already? He would be late for school! He swung down from his hammock and into his wheelchair. Its shock absorbers cushioned the impact ... [+]

The adventurous little mole, whose name was Oscar, lived in a mole-hole at the bottom of the sea with his unadventurous mother and father and his timid little sister who was scared of ... [+]