Sami was awoken by the buzzing of his third alarm. Was it 8.30 already? He would be late for school! He swung down from his hammock and into his wheelchair. Its shock absorbers cushioned the impact, and the engine buzzed as it turned on.
Sami loved his wheelchair – it had a powerful motor and chunky tires that could drive on almost anything. It was also light enough to lift with one hand!
Sami grabbed his school bag and was rolling outside when he heard his nan call out, "Have a good day at school, babi!" She was still curled up in her hammock. 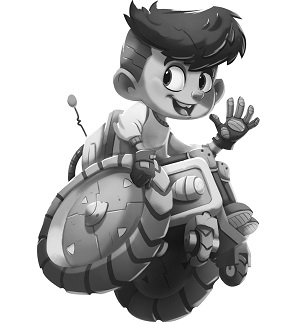 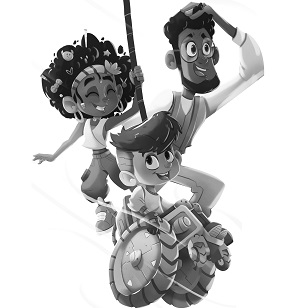 Theofina's class had won a contest. The contest was for a special trip. They were going to go back to the time of the dinosaurs!
Theo was happy, excited, and worried. She wanted to be brave, but ... [+]

Nelson Packrat was a pack rat who lived in a small cave. One day his mother looked around the tunnels of their nest and thought it was time for a spring cleaning.
"Nelson, I can barely get into ... [+]

SNORRRRR!
Jason sat up in his space bunk. What was that noise? It wasn't the wind. He'd heard and felt lots of Planet Purple Plum wind in the front yard that afternoon while Mia and he were ... [+]