Sizzle Wants to Win the Lottery

Sizzle was a nice little pig. He was the third boy in the Littlepig family. He shared his little bedroom with his two big brothers, Porky and Hammy. The three little pigs slept in bunk beds and Sizzle was always on the very top.
Every morning, Mrs. Littlepig came to wake them up by opening the big window in their bedroom. Sizzle didn't want to get out of his nice warm bed. It was cold outside, and the grass they had to walk on to get to school would be wet. Sizzle didn't like school very much. Adding up was easy. But then there was spelling and Sizzle hated spelling. I before E except after C. Unless it was an exception. The rules made no sense at all. Sizzle couldn't wait for the end-of-school bell, the bell that meant it was tea-time!

Mr. Littlepig, their Dad, had a grocery store. The children used to stop by the store when they got out of school. Every day they were allowed to choose a sweet. Sizzle always chose the biggest sweet. Sizzle's Dad was very kind. He worked hard to give his boys a good education. He sold lots of tempting things, such as cakes, chips and peanuts. He sold some strange things, too, like sausage and ham...

His Dad also sold lottery tickets, tickets with which you could win pots of money. All his life Sizzle had watched his father's customers buying lottery tickets. Sizzle's Dad had explained to his children that whoever won the next day would be very, very rich, because the lottery had extra big prizes on Friday the 13th. That night, Sizzle couldn't get to sleep for a long time. When he finally did, he dreamed that he won the lottery and was very rich and didn't need to go to school anymore. 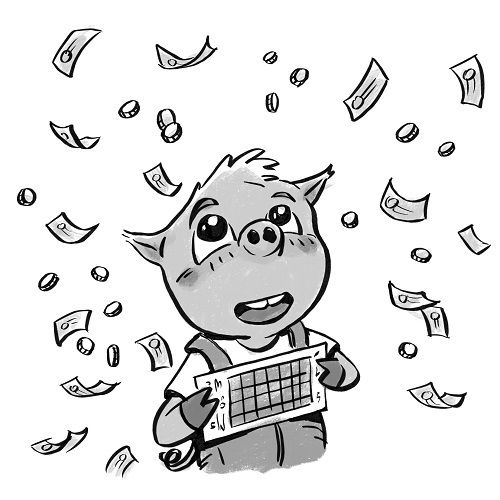 The next day, Sizzle went to the grocery store as usual. One of his Dad's assistants happened to be in charge of the store. Sizzle took all of his Christmas and birthday money out of his pocket and ended up buying a lottery ticket that he thought looked very lucky. He paid for it and quickly stuffed his ticket deep in his pocket. He didn't want his brothers to know about what he had bought. That night, when the whole family was sitting watching television, Sizzle stared at the lottery numbers appearing on the screen. He had learned his numbers by heart. Sizzle's heart started to beat like a drum! He had got the first three numbers. Sizzle stood up and went up to the television.
"Sit down!" shouted Hammy who couldn't see the screen.
But Sizzle couldn't take his eyes off the numbers which were appearing one by one. 22, 27 then 34... Wow, they were the exact numbers Sizzle had picked. He felt his trotters tremble and started to think very fast, I'll buy millions of sweets, a house for my brothers, a strong house, not one made of straw or wood! I'll give loads of money to all my friends...
"What's the matter, Sizzle? You've gone really pale! Is it because of the lottery?"
Sizzle didn't know what to say. In the end he nodded his head slowly...
"Why? Tell us!" demanded his parents.
Sizzle, totally embarrassed, looked at his trotters and timidly told the whole story...

Suddenly the Littlepig family was very rich... Amazingly rich! Daddy Littlepig employed somebody to take his place working in the grocery store. He had an enormous four-story house built, where each little pig had a huge bedroom, and each with its own jacuzzi.
Mommy Littlepig went to the hairdresser's every day. The Littlepig family's neighbors were very jealous.

One day, Mrs. Prettycow, who lived next door, came to see them. She explained that she needed some money to repair her fence, which was falling down. Mrs. Littlepig was a very good friend of Mrs. Prettycow, so she gave her some money to have her fence repaired. The next day, it was Mr. Nastywolf who came to visit because he wanted to change his car. As Mr. Littlepig was a good pal of Mr. Nastywolf, he gave him some money to buy himself a car. Then the next day there were three more neighbors. First the Duckham family who wanted to build a swimming pool for their youngest duckling (who was apparently really naughty). Then Mr. Cockerel said he needed to buy himself a gold watch so he could wake the village up at exactly the right time. And finally, Mr. Shepherd, who wanted to buy a hundred and fifty-three mobile phones for each of his goats so that he could contact them at any time, in case there was danger.
Day after day, the whole town came to ask the Littlepigs for money. Mr. and Mrs. Littlepig, who could see their fortune disappearing before their eyes, refused to give any more money away.

And the inevitable happened: no one spoke to the Littlepig family anymore, or came to knock on their door.

One morning, Mrs. Littlepig was feeling a bit tired. She didn't bother waking up her three boys. After all, they were rich now for the rest of their lives. So perhaps school wasn't really necessary, Mr. and Mrs. Littlepig had said to each other. And over the following days, the little pigs woke up at midday. They spent every afternoon splashing around in their pool.

But eventually, they were left with just one problem: they had no friends left. Nobody came to visit the Littlepig family, not the neighbors, nor friends from school.

He thought about this and said to himself, "It was loads better before, without all the money."

And as all the Littlepig family had become very miserable, Mr. and Mrs. Littlepig decided to give all the money to the village to build a giant swimming pool where everyone could have fun together!

Patricia Busking · 3 months ago
Good day viewers… I have been trying to win the lottery for some years now but I have not been lucky enough to win a dime. In search for assistance on how I can at least be a winner of any lottery, I found out about Dr Amber who has been helpful with his winning numbers he gets through his spells to help people win the lottery. I got in touch with him via: amberlottotemple@yahoo.com to know how I can win the lottery and he told me everything I needed to know and do before the spell can be done for me and I acknowledge it. He prepared the spell for me and gave me the winning numbers to play and instructed me what to do as I played the jackpot lottery. I did as he instructed and after a week, I decided to check if I was lucky enough to be among the winners. I screamed out in Joy immediately I saw my ticket numbers as the winner of $393 million dollars. I’m so grateful and appreciative to Dr Amber for helping me. You can reach him on WA +12096910783 or call +13183065044 for any help.
Display all comments (1)
Children's

This is it. The dreaded day has arrived.
Luke puts on his coat, picks up his schoolbag, kisses his mother and walks sadly out of the cosy nest that is his family home. The weather outside is ... [+]

The creepy old house smells like three-month-old kitty litter and rotting dumpster food.
The night is cold, and the air in the run-down house even colder. Rachel takes another step down the hall ... [+]