A Line Drawn in Chalk

Justine and Margie had decided to take the lead in the revolt. They were discussing in muttered tones in their little brother Charlie’s room. As he was only two years old, he would not be capable of giving away the plot his sisters were busy hatching against the self-proclaimed chief of their school.

It had all started when Henry, a tall 6th grade boy in Justine’s class, had drawn a chalk line in the playground that nobody was allowed to cross. Fatboss – as all the kids in the school called him behind his back – was the leader of a gang of boys and as vicious as he was tall and hefty. Surrounded by his bodyguards, he would parade about in the area where the play equipment had been installed. Nobody except the members of his gang had the right to cross the line, which he redrew every day. Anyone who dared go beyond it took their life in their own hands, as the territory on the other side was where the authority of Henry and his gang reigned.

The few uncooperative or careless children who did cross the line were captured mercilessly and treated as prisoners who had to carry out Fatboss’s orders and do as they were told, either to bully smaller children or to shout rude words at girls or teachers. On top of that, none of the kids, other than those in Fatboss’s gang, were allowed to play on the slides, the climbing wall or on the mini soccer field. So a single line drawn in chalk had defined a forbidden area that became the object of everyone’s envy.

After suffering exclusion and all kinds of provocations, Justine and her friends had made the decision to mount a counterattack. Justine began by asking her sister Margie, in 4th grade, to recruit as many supporters as possible. As it was the youngest who suffered the most harassment from Fatboss’s gang, Margie had some difficulty finding children prepared to take part in the revolt. So meetings had to be organized that felt rather like the gatherings of a secret club, and the two sisters, who both liked stories of superheroes, presented their group as a league of champions against injustice on the school playground. Margie quickly designed a logo to serve as a sign by which they could recognize each other and to seal their membership.

The playground gradually became covered in strange signs drawn in chalk, featuring a line broken by a bolt of lightning. Fatboss’s gang was too busy to chase after the little ones who, on Justine’s orders, were distracting Henry’s henchmen by making secret raids across the line. They failed to notice that a revolt was brewing that would soon sweep away their little kingdom and its chalk border.

One morning, at recess, when Fatboss had just drawn his line dividing the space into two unequal parts, he saw, standing in front of him, right on the edge of his line, one, two, then three, then four and then a whole stream of pairs of feet taking up position all along the length of the playground. Surprised by this revolt, he hurled insults at the children, promising terrible reprisals if any of them dared cross the line. But his voice was a little less confident than usual, he did not know toward which of the children to direct his threatening glare. None of them spoke; none of them seemed ready to retreat.

And when each of the rebel children showed their hand marked in felt pen with a black line crossed by a yellow streak of lightning, as if they were holding an invisible shield out in front of them, Fatboss lost his swagger and withdrew to take refuge in the midst of his gang, standing dumbfounded in the face of this surprising, silent reproof. They had never thought the other kids would pull together to fight back. 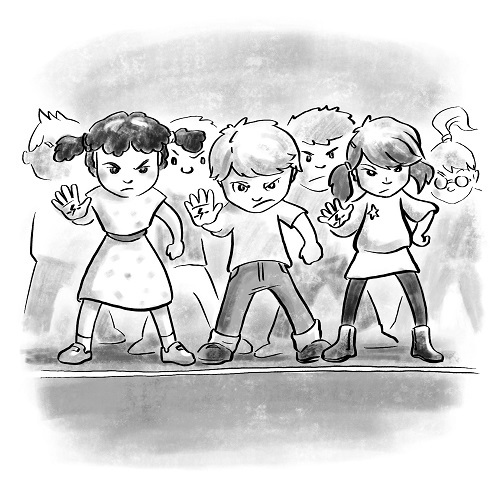 Suddenly, Justine and Margie gave the order to step forward. The boundary was crossed and some thirty children were now on the other side, advancing in silence in close ranks. There was strength in numbers, unity would prevail, and that morning all the children were able to take possession of their playground once more, the borderline drawn in chalk had disappeared at last. They had managed to conquer the other side.

There was no resistance, apart from a few jeers from Fatboss and his gang as they retreated before the determined troop of crusaders of the broken line, promising vengeance for the occupation of their territory.

But revenge never came, because the little crusaders had taken upon themselves the role of guardians and every day at recess they kept watch so that no line would divide the play space that belonged to all the children. The new border would now extend beyond the walls of the elementary school, and the oldest of the crusaders would doubtless be protecting new territory in the new school year at the local junior high.

I was coming home from school through the park, like I always do, and suddenly, there he was in front of me.
That was the first time I saw him. He looked so amazing that I stopped a few feet ... [+]

— Psst! Kiddo!
Mary continued to walk straight on, looking right ahead of her.
— Psst!
Who was that? Where did that whistle come from?
She turned her head. Nobody there. Nothing but the ... [+]

Lydia hugged her new purple sketchbook, pens, pencils, watercolors, and paintbrushes.
She jumped and twirled at the thought of making her very own ART.
But when she opened the ... [+]