A Box of Things

Nathan is the author of a collection of fifty short fictions, The Origin of Doubt, a Lambda Award finalist. His stories and essays have appeared in over 100 publications. He's received a Truman Capote ... [+] 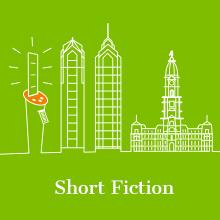 "She's a difficult pleasure," I said of my ex-wife. I was standing at the front door of her house, talking to her new partner, Sammy, a woman. My ex-wife, Lily, was not there.

We both took in the complex and awkward implications of my statement before Sammy smiled, her illusive lesbian I've-experienced-more-than-you'll-ever-know-and-I-don't-need-to-prove-it-to-you smile.

I smiled back with a polite, You're-probably-right smile.

Then her lips curled up into something genuinely happy—I guessed she was remembering a moment with Lily or connecting some dots into a picture that pleased her. I imagined her saying, "Sometimes the difficult is worth it."

And I imagined responding "Yes. Sometimes."

And in that brief conversation that we didn't have, Sammy and I resolved the differences and tension between us and came to understand that we were never in disagreement but were simply choosing to look at Lily from two different perspectives.

At least that's how I saw it.

"Well, thanks for dropping these by," Sammy finally said, which seemed to confirm that we had said much more than we had said, that everything was clear.

I'd come over to drop off a box of toiletries Lily had left, which I'd only now gathered up in a spring cleaning, six months later.

"You too. And I'm sorry Lily's not here. She just ran out to do some shopping."

This was the end of the conversation, but still, I somehow didn't turn to walk back to my car right away. I stood amazed at how much we could say without saying anything and how little we said while talking a lot.

I looked at Sammy, her unrevealing face, and then past her to the hallway of their house, where the box now lay on the floor, like a Trojan horse I'd forgotten to load with men.

Of course I had thought I would see Lily, thought I would see the appreciation on her face when she saw how I had gathered her things and bothered to drive across town to give them to her. Now, I'd miss seeing her reaction when she finally saw the box of things, miss sensing if she appreciated me at all, respected me, not as a partner but as a human being—the relationship we had been reduced to.

Seeing each other as human is not a bad consequence to all this, I thought, and I glanced at Sammy one last time, realizing that I could, as well, see her as human rather than the woman who stole my wife.

But now it seemed she was staring me down, daring me to stay there a millisecond longer. The natural thing—or at least the civilized thing—would be to thank me again as a way of sending me off. But Sammy stood there silent. Maybe we hadn't come to an understanding at all. Maybe she would hide the box and only tell Lily about my comment. "He said you were a—what was it?—a difficult pleasure."

Lily would shake her head and they would both laugh at my phrase. Then Sammy would add, "Oh, and he dropped off this box of half empty shampoo bottles." And they'd laugh some more.

I turned from the stoop then, unable to look at Sammy any longer. She had won, told me all the things she had wanted to in her silence, namely that my delivery wasn't worthy of a second thanks, that I wasn't worthy of it.

As I took the three steps off the landing, I recalled that phrase, esprit d'escalier, a French term for that ability to think of what to say in a conversation when you're walking away and it's too late. Why do the French always have words for such subtle and accurate states of mind?

Only I didn't actually think of what I should have said in the conversation we didn't have. I only churned over failed possibilities as I walked along the sidewalk back to my car. I wanted to turn back, to see if Sammy was still there, guarding their door, making sure I left before Lily returned. But I couldn't look back, and didn't want to give her the satisfaction of seeing me do it, that Orpheusian gesture of doubt and weakness.

I stepped into my car, closed the door and started it up. I sat in my own silence, where I felt I could not be watched, where I was protected by the glass and metal of the passenger door. I was about to pull out when I saw Lily's car approaching from down the street. Here it was, coming right toward me, the chance to see her, to step out and explain what my visit meant before Sammy could tell the story her way.

I put my hand on the door latch, ready to open it, when I reconsidered. You will look like a fool, a desperate fool, I told myself. Not only to Sammy but to Lily. If you drive out now, you will pass her, and she will see you, and she will see that you drove on, either aware of her or not. She will not know if you passed her without waving on purpose or not. She will then see, no matter what Sammy says, that you offered this gift, no strings attached. She will appreciate that. She will admire you for it.

And so I put the car in gear and drove off, willing myself to keep my eyes on the road as I passed Lily's car. It was difficult to do, but once I was past her, I felt a kind of pleasure, greater than I would have had from any conversation I could imagine.

Fred is an arsonist—and, Fred is not an arsonist. Let me explain: Fred has thought of fire, its power and grace, for a long time. Perhaps since he was a child. He often watched fires, mesmerized ... [+]

Felix jumped up onto the sofa and, lying full length against his master, began to purr noisily to show how contented he was. His master stopped reading and began to stroke him, delighting in sinking ... [+]

It's a sunny Sunday afternoon —celebratory day: the sun hadn't visited your city's sky in ages— and you're out in the flea market. Browsing the offerings among the throng of people: old things ... [+]