When the first snow fell, Alfie and his little brother Ike quickly dug out their warmest clothes, pulled on their gloves, and got down to the important businessof having a snowball fight!
The brothers quickly got tired of throwing snow at each other, though, so they decided to make a snowman instead!
First, they made a snowball and rolled it around the garden. It picked up snow as it went, and soon was very big indeed. That made a fine body for the snowman. They then added another ball on top for a head, and two branches for arms.
"Hello chaps!" Old Mr Tompkins, their next-door neighbour, was leaningon the fence and looking at their handiwork. "That's a fine snowman– but these things will give him the finishing touch!"
He handed them a carrot and some pebbles and winked. "I used to usea carrot and these pebbles to make snowmen when I was a boy.. There's a little bit of magic in them, I reckon!"
He gave them a wink and a wave as he went indoors.
Alfie put the pebbles on thesnowman's head to make eyes and a mouth, then lifted Ike up so he could give the snowman a carrot-nose. They then stood back and admired their work. 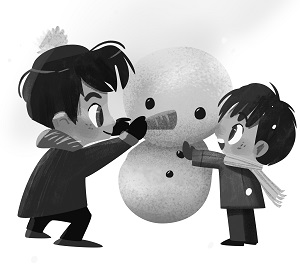 However, they were surprised when the snowman stretched out his twiggyarms, opened his pebble mouth, and gave a great yawn!
They were even more surprised when the snowman spoke with a voice that sounded like the wind blowing through bare winter trees.
"My, my, that was a long sleep. Who are you two, if I may ask?"
Alfie was dumbstruck, so Ike piped up.
"I'm Ike and this is my brother Alfred. Who are you?"
The snowman smiled and said, "I'm Mr Fimbulwinter! That nice Timmy Tompkins used to make me a new body every winter and we wouldplay in the snow together!"
Alfie thought he understood. "Mr. Tompkins is quite old now, so he gave us the pebbles that brought you to life. Would you like to play with us instead? 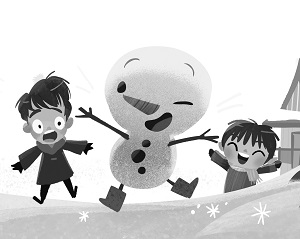 "After thinking briefly, Mr Fimbulwinter agreed. The snowman was good at making snowballs, and he even helped them build a snow fort!
As the sun dipped towards the horizon and coloured the snow pink, purple and orange, the boys told the snowman that they had to goinside and finish packing.
"Packing? Where are you going?" Mr Fimbulwinter asked.
Ike started talking so quickly that Alfie was worried his brother would run out of air! "We're flying all the way to Australia for Christmas! My dad's brother and my cousins live there! It's in the bit of the Earth they call the Southern Hemisphere so it's summerat Christmas, if you can believe that! So we get to swim at the beach andhave barbecued prawns instead of snowfights and roast turkey!"
The snowman's eyes widened, and he touched his chin with his twiggy fingers.
"This ‘Australia' sounds lovely! I wish I could see it, but I'd melt in the sun!"
Alfie had an idea! He grinned and said, "I think I might know how we can take you with us!"
The boys went inside and finished their packing – they had their bathing costumes, snorkels and T-shirts. Their parents were so busy that they didn't notice Alfie folding up a carrot and some pebbles in one of his towels...
The next day, the boys woke up extra-early, and Mum and Dad hurried them into the taxi to the airport. Then there was a lot of waiting in queues in the big echoey airport, finding their seats on the plane, and a looooong flight. Luckily, there were lots of movies to watch on the little screens in front of their seats, and the nice flight attendant brought them as many drinks as they wanted!
Alfie and Ike stared out of the window as the plane came in to land in Australia. The earth was red and tan, with dark green trees and bushes around the houses below.
After landing, there was even more waiting in queues, scrambling to collect their bags from the conveyor belts, and finally going through the automatic doors to where Uncle Dave was waiting with their cousins – Ruby, Josh and Claire.
It was difficult fitting everybody and their bags into Uncle Dave's truck, but they managed it somehow!
They soon arrived at Uncle Dave's house in a suburb near the city. It was shaded by big trees that smelled like Mum's special shampoo.
Uncle Dave clapped his hands. "So, do you guys want to go to the beach? Or are you too jet-lagged?"
Ike and Alfie didn't even bother to answer – they quickly changed into their swimming costumes, put on T-shirts, and were ready to go! Of course, Alfie had the pebbles and carrot safely in his towel...
"Don't forget your thongs!" said Claire. Alfie looked confused, so Josh explained that ‘thongs' was the Australian wordfor ‘flip-flops'...
When they set off down the tree-lined street towards the beach, it became obvious why they needed the thongs – the sun was so hot that the tar of the road was melting a bit, and it shimmered like a mirage!
The beach was more beautiful than the boys could have imagined, with yellow sand and a deep blue sea. Dozens of kids were playing in the water, and further down the beach they saw surfers catching waves.
Ike and Alfie put on sunscreen and dabbed zinc on their noses. Then, they and their cousins ran over the hot sand to dive into the sea.
After splashing around for a bit, Alfie told Ruby, Josh and Claire about the magical friend he and Ike had made, and they agreed to help give Mr Fimbulwinter a summer Christmas!
They took handfuls of wet sand up the beach, shaped it into two big balls, and rolled one on top of the other. Claire and Josh found branches to be the ‘sandman's' arms, and Alfie took the stones and the carrot out of his towel.
When he gave the sand figure its pebble eyes and mouth and carrot nose, Mr Fimbulwinter came to life in his new sand body.
"Well I never!" said the sandy figure as he looked out at the sparkling sand, the crashing waves and the surfers in the bright sunshine.
"So this is your summer Christmas? It is wonderful!"
Ruby, Josh and Claire were very surprised when the ‘sandman' began talking, but they soon started chatting to him. The kids even found a hat and sunglasses for their new friend and dabbed zinc on his nose.
Mr Fimbulwinter liked his new Australian outfit and gazed contentedly at the beautiful beach under blue summer skies. He was a very lucky snowman indeed!!

My name is Andy Tannenbaum, and I'm a private eye. But until last week, I'd never solved a case—except for the time my little sister Tara thought someone had stolen her Batman underpants. I found ... [+]

It was the summer of 1983 and eight-year-old Danny Brown was having a terrible time. A shy and serious only child, he had recently been forced to move with his parents and, as far as he was ... [+]

"This is a fruit of every season which carries the scent of its travels..."
My grandfather often repeated this little phrase to me when he was talking about his clouds. He has the best collection ... [+]