Olivia and her mum are superheroes. Last month, they battled the scary sea witch's gigantic jellyfish down at the beach. Last week, they protected the world from Martian attack. Yesterday, they destroyed Doctor Doolally's rampaging robot zoo. 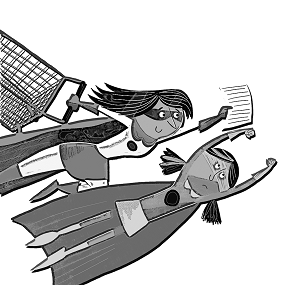 Today, they are going to the shops.
"Boring!" said Olivia.
"Even superheroes need to go to the shops," said Mum. "Get your boots on, it's time to fly."
All superheroes do their shopping at Superhero Supermarket. It sells capes, costumes, cars, gadgets, and super-powered breakfast cereals with tiny robot toys inside – it is amazing!
To normal people, like you and I, the Superhero Supermarket would probably be the most fantastic place in the world. To superheroes, it's as exciting as any normal supermarket. So, not exciting at all.
The shelves in Superhero Supermarket go right up to the sky. No one has to worry about reaching the top shelf though, because everyone can fly or stretch or climb.
Olivia was at the sweet counter, checking out the lava-filled atomic fireball gobstoppers, when she spotted a strange old man. He was wearing a black hat and a long black coat. He had tiny dark eyes, which darted around the shelves nervously. The old man was picking up laser cannons in the super-weapon section. Olivia thought he looked suspicious. She pointed him out to Mum.
"It's very rude to point," said Mum. "He's probably just one of those old superheroes who's come out of retirement for one final battle. Like Grandpa did."
Grandpa had his final battle a few years ago and defeated his arch-enemy Professor Wormtangler. Now, Grandpa was quite happy on his super allotment growing giant carnivorous cabbages and trimming triffid tentacles.
Olivia was not convinced. "No. I'm pretty sure he meant to go to the supervillain supermarket. I'm going to keep an eye on him."
Olivia saw him again while she was trying on new rocket boots. This time, the strange old man was looking at spaceships and mini submarines, as if deciding which one to use in his evil plans. The whole time, he kept looking around to see who was watching him.
"Definitely up to no good," thought Olivia, and she followed him past the teleporters and flying cars, and down towards the super suit section, which was full of colourful masks and wigs and helmets and cloaks.
The old man picked up a black mask and a long purple cape with a huge pointy collar. 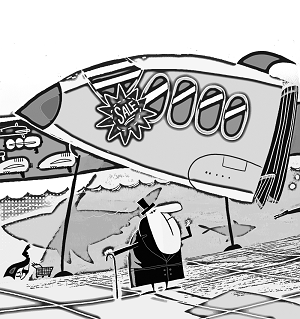 "I knew it!" thought Olivia, and quickly raced off to tell Mum there was a supervillain in the supermarket. Mum was already at the checkout, and just as Olivia flew over to her, the old man appeared. Still looking around, he shiftily reached into his big black coat.
"Look out!" shouted Olivia, zooming straight towards the old man in case he pulled a stolen laser cannon out of his pocket. But the old man didn't do that. Instead, he put his hands up in the air and said, "Please help me! I think I'm in the wrong shop!"
"Olivia! What on earth are you doing?" cried Mum.
"I've been following him around the shop," said Olivia. "He was acting strangely. He kept looking around."
"That's because I'm lost," said the old man. "I forgot to put my glasses on this morning, but I've just remembered they're in my inside pocket."
Olivia felt embarrassed.
"I'm so sorry about this," said Mum. "Are you okay?"
"Yes, dear, just a bit confused. I came for cat food and sardines. But the pet food here seems to be for giant pumas. And there aren't any sardines, but there are tins of shark!"
"Yes," smiled Mum. "Superheroes get super hungry. What's your name?"
"Jack Moore," said the old man.
"Well, Mr Moore, can Olivia and I take you to the proper supermarket? After that, we'll get you home safely."
"Oh, that would be super helpful," said Mr Moore.
So that's just what they did. And now, Olivia goes to visit Mr Moore every day, and she gets his shopping for him.
Because being a superhero isn't just about battling robots and aliens; it's about helping with the little things too. 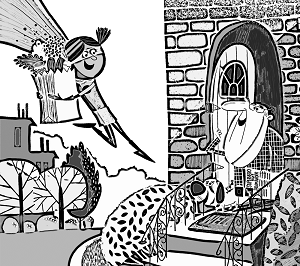 Wendell the dog awoke to the wonderful smell of summer.
Samantha the cat stretched and yawned. She could smell it too. "This is a perfect day for..."
"...going to the beach, right?" Wendell ... [+]

— Psst! Kiddo!
Mary continued to walk straight on, looking right ahead of her.
— Psst!
Who was that? Where did that whistle come from?
She turned her head. Nobody there. Nothing but the ... [+]

Ice cream at bedtime,
Aunt Betty's the best!
She knows in the summer
it's hard to find rest
when faced with hot sheets,
hot pillows, hot bed,
no place cool enough
to lay a hot ... [+]