You are my favorite cousin, and as this is the worst day of my life, you are the only person I can talk to about it. I’ve been missing you, ever since the vacation at Gran and Grandad’s over the summer.

Going to middle school was a really big change. Even though I do like being in seventh grade, I found it a bit hard to get used to. Like finding the classrooms, when every lesson is in a different place. There are a thousand of us in this school, can you believe it?! In our class, the boys are really awful. Just kids and half of them are smaller than the girls! Not very nice to look at at all! We haven’t got any Justin Biebers or One Direction here! I hope it’s a bit better for you in ninth grade?

Last week, there was a new boy in our class. His name is Tom. He’s a year older than the rest of us and he comes from Barcelona. He’s not Spanish, but because his dad changes his job a lot, he’s lived in loads of different countries all his life. Spain, Italy, Germany and even Paris! How lucky is that! He’s amazing at French. Not so good at math. He’s taller than me, he’s got pale green eyes and he dresses really well. IKKS shirts, Desigual scarves, they really suit him, he looks great. The other boys think they’re cool in hoodies… lol!

Elisa and Margot tried to get themselves noticed straightaway. But he stayed with the other boys at break, or spent his time sending texts. He took no notice of those two, and they were not very impressed. In art class this afternoon he sat next to me. The teacher told us to choose a work by an artist that we really like. We had to draw it in pencil, with shadows. You know how I love drawing! By the way, I’ve nearly finished your portrait, I’ll give it to you for Christmas, I promise. I chose the statue of the Thinker by Rodin. Dad took me to see it and I love it. Tom watched me all the time I was drawing it and he looked amazed. I was quite pleased with myself. He asked me loads of questions when I’d finished, whether I wanted to do that for a living, all that sort of stuff. I was just happy he was talking to me! He told me I was really good and smiled at me. He is so cute!

When the bell rang at the end of school, we continued chatting. We came out of school and walked towards the buses. Suddenly, a car horn sounded loudly. A car braked right in front of me and Mom shouted out of the window, “Hello honey, I’ve come to fetch you, surpriiiiiise!” I was sooooo embarrassed. I wanted the ground to swallow me up right then and there. Tom sniggered and said, “Well, bye then, it’s baby’s dinner time!” 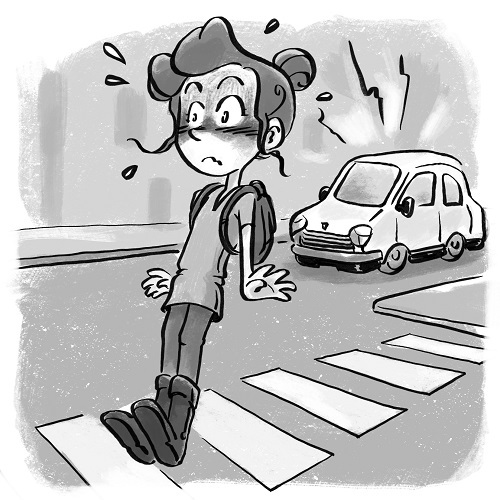 I will never go back to school ever again. Tom obviously thinks I’m just a little kid! I am not talking to my mother anymore. She’s fed up as well, she left work early to come and fetch me.

Colette (your cousin who is dying of embarrassment)

Pauline was finishing the washing-up after breakfast while watching with amusement the bullfinches and blue birds quarreling in the garden over the crumbs of bread she had just thrown out of the ... [+]

“Maddy, we’ve got some very exciting news to tell you,” said Mom and Dad.
And I was very excited. I was sure it was a dog! They’d promised.
“You’re going to have a little brother o ... [+]