The Story of the Sunbeam and the Butterfly

Once upon a time, in the softness and perfect blossoming of a July summer, a butterfly was fluttering at the whim of the wind, under the knowing gaze of the sun. She flew high in the sky, higher than any other butterfly. She wanted to see what was hidden beyond the clouds. Her ethereal grace and shimmering colors attracted the attention of a Sunbeam. Dazzled by the aerial dance of that little insect, ephemeral yet so full of life, the timid Sunbeam fell deeply in love. Not knowing how to express the ardor of his feelings, he started shining more brightly. He bathed the flying butterfly in light as she flew higher and higher in the sky, to reach the clouds. He illuminated her with all his tenderness and lit her with his passion.
The Sunbeam had eyes for none other than the Butterfly-high-in-the-sky. Every day he sent her more light and heat, in homage to her enchanting wings and the beauty of her dance. He shone and blazed for so long and so brightly that the heat of his rays became unbearable. Blinded by his love, the Sunbeam did not realize that he was burning the wings of the Butterfly-high-in-the-sky. She was hurt and could no longer fly. She fell out of the sky.
As she fell, she saw the clouds recede into the distance, and her heart broke with sorrow for that dream she would never attain. She was about to crash to the ground when the wind, feeling sorry for her, began to blow and wafted her gently onto the green grass.
When he saw the Butterfly he loved so much fall down with her wings on fire, the Sunbeam screamed with fear and regret. And when he realized that, because of him, she would never fly again, the Sunbeam hid behind the clouds.
Consumed with sorrow and guilt, he burst into tears.
He cried for a long, long time.
When his tears dried at last, he came out of his misty hiding place. His first thought was to find the Butterfly and tell her he was sorry. But when he looked down at the earth, the Sunbeam discovered that the Butterfly-high-in-the-sky, who had made his heart beat faster, had disappeared. He set off to look for her, but he never found her.

While he was away, winter arrived. The world closed in beneath the torpor of the cold. Then, one day, resigned and with a heavy heart, the Sunbeam went back to his place in the sky. Summer returned and awakened life that had been asleep for a long time. The grass grew green again, the flowers opened their petals and the insects buzzed in the breeze. And among them, little butterflies flew from flower to flower. Sometimes they flew high in the sky, to see what was hidden behind the clouds.
When he saw them, the Sunbeam wept tears of joy. He found something of the one he had so loved in the shimmering colors, and in the graceful beating of the wings. Anxious to atone for his mistake, he made it his duty to protect them, so that in their short lives they would know nothing but sweetness and delight. The butterflies saw that he was a friend. From then on they only came out if he was there to watch over them.
From that day on, the Sunbeam has cradled the flight of the butterflies in soft and gentle light, in memory of the one who wanted to see beyond the clouds. And his mere presence is enough to draw them out into the breeze and make them dance high, very high, up in the sky. 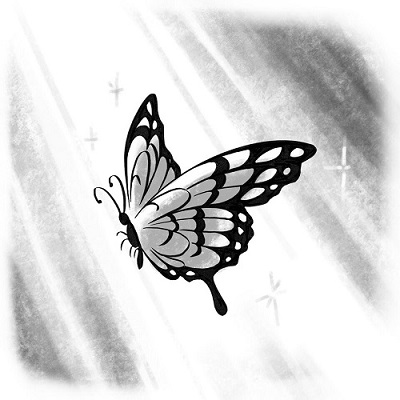 Once upon a time there was a King and a Queen who loved each other with all their hearts and wanted to have a child. Soon they had the great joy of welcoming into the world a very pretty little girl ... [+]