It never would have happened if Jakub hadn't suggested that they take a short cut home.
Lincoln, Jakub and their friend Biggie Dean were walking back to the village after football practice when Jakub said they should turn down Caulfield Laneand cut through the Stony Field.
"It's much faster than going along the main road!" he told them enthusiastically. "We can cut across the fields and jump over my back fence!"
Lincoln wasn't sure, but Biggie Dean just shrugged his shoulders and nodded. It looked like they were taking the short cut.
They set off down the narrow lane in the warm spring sunlight, swinging their schoolbags as the wind blew across the green fields. They had Lincoln's football with them and passed it to each other as they went.
Ahead, they could see the Stony Field and the standing stones that gave it its name. They weren't big and fancy like the ones at Stonehenge, of course.
They were just weather-worn rocks, covered in lichen and arranged in arough circle about ten metres across. Nobody knew who had built the circle or when, but it was certainly there when the village was founded. They could see the village of Trowbury in the distance beyond the stones, with the row of new houses that they lived in and the old church tower behind.
When they got to the end of the lane and turned into the field, the sun got into Lincoln's face, blinding him for a moment. He blinked hard and then opened his eyes. He could see again, but things looked slightly different.They were still in the Stony Field, and the stones and the walls were still there. But why did they look slightly less weathered and lichen covered than before?
Lincoln saw that the church spire was still in the distance – but where their homes should have been were somewhite-painted cottages with thick thatched roofs. The fields nearby weren't green with grass – instead,they were covered with golden wheat.
That was when Biggie Dean nudged him and pointed. Three kids were sitting by the wall, staring at them in amazement...
The two boys and the girl were about the same age as them, but their clothes were definitely different! The boys were wearing simple shirts and what looked like woollen tights.
The girl was wearing a woollen vest and a dress made out of rough cloth.
It looked as if they had interrupted a picnic – the kids were eating a biglumpy-looking pie, and there was a small pile of apples in front of them!
Well, somebody had to make the first move! Lincoln walked over to one ofthe strangers, smiled, and stuck out his hand. "Hello! My name is Lincoln – what's your name?" 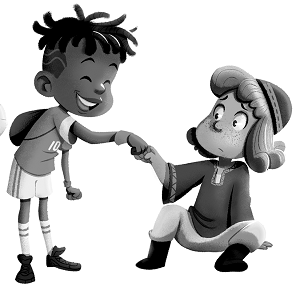 The boy looked at him. He was quite burly, with blond hair. After hesitating for a second, he took Lincoln's hand with a smile and shook it.
The big kid then said something to him in a language Lincoln couldn't quite understand. He spoke slowly, and the words seemed to go on for along time, but he thought he caughtthe name ‘Daniel'.
Daniel then pointed at the other, skinnier boy and the girl, who hadfreckles and red pigtails that stuck out from her head at strange angles.
"Thomas. Mabel." Thomas gave a shy wave, while Mabel grinned and took a big crunchy bite out of an apple.
Lincoln pointed at Jakub and Biggie.
"This is Jakub, he's the best player in our team. And this is Biggie Dean. You can call him Biggie." The three strangers started talking among themselves while staring at the bright red football kit Lincoln and his friends were wearing.
"What language are they speaking?" asked Lincoln. Jakub shrugged andsaid, "It's definitely not Polish!"
Biggie then spoke up, which didn't happen often. "It sounds a bit like English – but with different sounds and slower..."
Daniel then pointed at Lincoln's football shirt, and said something that sounded like a question. Lincoln held out the front of his top and said,"This is the kit of Trowbury Rovers, our team. Do you play football?"
Lincoln picked up the ball and showed it to the other kids. "This is a football. You kick it!"
He did a few keepie-uppies, juggling the ball with his feet. Daniel, Mabeland Thomas looked impressed.
He then kicked the ball to Jakub, who did his favourite trick – the around-the world crossover combo!
Using a lot of pointing, the boys taught the strangers how to play football, and they soon got the hang of it. They divided into teams – Lincoln, Danieland Mabel against Jakub, Thomas and Biggie. 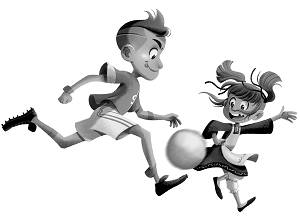 At first, they thought Mabel couldn't play because she was in a dress, but she charged about the field with the rest of them! They used the standingstones as goalposts and began kicking the ball about!
Lincoln's trick of rolling the ball out the way of tackles made Daniel laugh,and Mabel soon figured out how to do that too! Thomas didn't use fancyfootwork, but just charged at the ball with his face curled into a scowl and kicked it as hard as he could! They had a great game, and by the time the sun was going down it was three all and they were tired out.
"Hey Daniel! Thank you for the game!" Lincoln said. He took off his shirt and handed it to the other boy. "I want you to have this!" Daniel accepted it with a big grin. 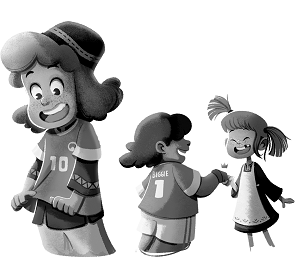 It was then that Thomas said something and pointed towards where the sun was setting. Lincoln, Jakub and Biggie looked in that direction, and were temporarily blinded by the orange light of the setting sun...
When they blinked their eyes, they were still in the Stony Field, but the kids in woollen clothes were gone, the sun was setting, and they could see their own houses in the distant village. They weren't sure what had happened, and thought about it in silence as they walked home.
The next day at school, Ms Beeton had a special treat.
"We are starting a module on local history!" she said. "This village has been here for hundreds of years, and this is an old tapestry that shows what life was like here in the Middle Ages!"
She unrolled a big poster of what looked like a big picture sewn in thread. They could see the church, and thatched cottages, and people gathering wheat in the fields. As the class all bent over to have a look, Lincoln noticed something strange, and pointed it out to Jakub and Biggie. In one corner were a girl and two boys kicking a ball made of brown leather – and one was wearing a bright red shirt!
***
Illustrations by Carlitos Pinheiro
If you like this work, share it!
Share it!
Report
0
To post comments, please log in
Children's

The battle was brutal and losses were high. Ralph the Brave, Robin of the Forests, and me, Ariane with the Golden Fingers, were the only survivors on our side. But we had no time to mourn the fate ... [+]

Long ago, on the highest hill looming over the lushest land that any ruler had ever ruled, a mighty castle stood watch over its idyllic setting. Inside the fortified dwelling, King Tell sat hovering ... [+]