The Moon in the Stars

Captain Peck is beside himself. Timmy has disappeared! The captain's concern is magnified by the darkness that has swallowed the ship, a sliver of cloud now covering the moon.

He motions to Cruvar, his loyal second mate.

"Blimey, Cruvar! Where on earth is that scounderel of a cabin boy?"

"Uh...how should I put it, Captain..." Cruvar weakly replies, avoiding the captain's gaze.

The two men look up at the same time and spy young Timmy hanging on to the very top of the ship's mast, his crying barely audible.

"For crying out loud, what the devil is he doing at the top of the mast?"

"You told him, Captain, that with his joyful spirit and the passion for life and work that's in his very bones, he'd soon reach the moon. So he climbed up to see if he could get there!"

"Holy rotten octopus! Is he dense, or what?"

"No, he's not dense, he's still just a bit young, naïve, and inexperienced."

"It's not the moon we have to grab now, but him! It's too dangerous — the sea is starting to really move, and the boat is rocking something fierce! He'll be tossed about like a ragdoll up there." 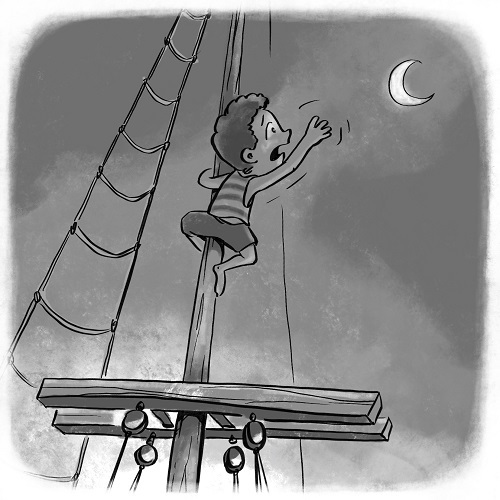 The captain rubs his beard and attempts to think. How can we get the reckless cabin boy down from there?

"You have to lure him down, Captain!"

"Well, his urge to reach the moon was stronger than his fear of falling, so promise him...well, I don't know...the stars, maybe?"

"Stars down here? And not in the sky?"

"It's all a question of imagination, Captain, but one thing is sure: we have to get him down before the sea gets too choppy. It's getting urgent!"

The captain scratches his long, thick beard again, which often helps him to think. Everyone watches him as he considers the problem at hand. Finally, he blurts out:

He positions both hands on either side of his mouth like a megaphone and yells,

"Timmy! Instead of the moon, I can offer you a star!"

"What?" the cabin boy shouts from up high, frightened by the increasingly forceful rocking of the boat.

"If you come down, I can offer you a star!" repeats Captain Pouic.

Timmy looks up and the sky, skeptical in the captain's ability to reach a star. They seem so far from here. But the captain is such a strong man that he might just be able to do it! And to own a star would be amazing!

So, cautiously, inch by inch, placing his feet on the cables and ropes and tightly squeezing the tall piece of wood all along his path, Timmy climbs down. He wants to claim his star so badly that he finds the strength and clear-headedness he needs to face his fear.

Below, the captain calmly welcomes him. Even if he is very relieved, he does not embrace him, avoiding too much brotherly contact, as these are all manly sailors!

"Well then?" the cabin boy innocently asks after having finally come down from his perilous perch.

Captain Peck grins broadly, plunges his arm into one of the ship's barrels solidly attached by rope, and pulls out...a starfish!

In the Langelot family, devotion to happiness is deep-seated. Right when Rose and Henry met, they were amazed by the range of possibilities that were offered to them, the chance to light up with ... [+]

Once upon a time in the North Pole, Santa Claus realized he had a problem.
Santa Claus was getting up there in age, and he was starting to get tired. His rheumatism and impressive ... [+]

Sizzle was a nice little pig. He was the third boy in the Littlepig family. He shared his little bedroom with his two big brothers, Porky and Hammy. The three little pigs slept in bunk beds and ... [+]