Tancred and his sidekicks used to cast a multitude of spells. Their saddlebags were filled to the brim with greed-powder for the jealous and cannon-powder for the violent. Smoke-and-mirrors-powder for the doubters and run-away-powder for the thieves on the run. They would cast these spells by the hundreds and thousands. For years, Tancred led his band of trainee no-goods who obeyed his every snap of the finger and wink of the eye. However, even Tancred's most loyal followers could not ignore the pain that Tancred's potions caused people, and eventually they abandoned him. Tancred now walked all alone, thinking over his actions. One day, he arrived at the village of Izkul.

Entering the village, he felt uneasy. His heart beat quickly. Tancred considered changing himself into... into... into... He couldn't decide. He really didn't know if he wanted to be the same self who had always caused strife and discord in people's minds and hearts.

The Izkulis were deep in a sweet slumber. The gifted Gaspard always slept with one eye open, alert at all times. He recognized the smell of Tancred from the villain's trip through the village the month before. Gaspard barked loud enough to warn the whole village that its terrorizer had returned. It was because of Tancred's spells that the Mirabelle sisters had had a falling out. It had taken six months to reconcile them. The Grimaud brothers were still not speaking because of the problems he had caused them in their love lives. The Izkulis shut their doors and windows super tight, sealed their chimneys and brought their animals indoors. They all shook with fear from head to toe. 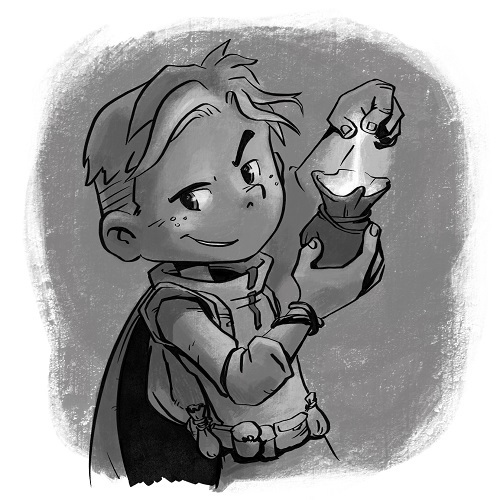 Tancred shouted out in a loud voice, "Open your windows! I'm not going to hurt you. Look for yourselves. I'm on my own."
None of the Izkulis made a move. Their doors and windows stayed shut. "That's just one of Tancred's ruses!" they told themselves. "Just another one of his ways to lure us outdoors so he can chuck his evil, poisonous powders in our eyes."

Up until this point, Tancred entertained himself by terrorizing people. Today, however, he realized he really wasn't in the mood. He put his backpack on again to go in search of a friendlier village. He walked for a long time, deep in thought, trying to imagine what new work he could do. Cabinetmaker? Painter? Fireman? Flautist? But none of these sounded appealing. He even considered going back to being the wicked Tancred since he felt really comfortable in that role.

He arrived at the village of Iznodheer. A rooster caught sight of him and crowed shakily, "Watch out! Tancred is back!" After warning the village, he raced back into the henhouse to seek shelter. The Iznodheers shut and locked their doors and windows, sealed their chimneys and brought their animals indoors. Tancred felt the same uneasiness he'd experienced in Izkul. His heart began rapidly beating once again. This time, however, he felt something else.
Something new.
A bitter taste in his mouth.

A brave Iznodheer shouted, "Get lost! We don't want anything to do with you."
"But I've changed. I'm not a bad person any more," said Tancred
"What are you then?"
Tancred thought for a moment and didn't know what to answer. He touched the canon-powder is his bag and was tempted to chuck it all out into the wind. Being a bad guy is so easy. Being a villain is so exciting.

But something stopped him. Deep down, he didn't want to throw smoke-and-mirrors-powder at the doubters, jealous-powder at the envious, run-away-powder at the thieves or cannon-powder at the violent. He put his bag on his back again and set out once again, crossing dunes, steppes, lagoons, mountains, rivers and oceans. He ended up at the village of Izheer, where he'd never been before. But even so, his reputation proceeded him. A camel saw him and yelled "Tancred is here!" The Izheers shut and locked their doors and windows, sealed their chimneys and brought their animals indoors.

Tancred felt the same unease, the same rapid beating of his heart, but mixed with something new.
Something different.
A bad taste in his mouth.
His skin felt raw and tender.

Again, he pleaded, "Open your windows. I won't do you any harm. Look for yourselves, I'm all alone."

The Izheers listened to him because they were open-minded people.
"What do you want?" they asked
"I want to make clay powder to heal ankle bones that are so brittle they break easily. Powdered almonds for people with a sweet tooth. Rice powder for grannies' complexions. Colorful powders for fireworks."

The Izheers clapped their hands and said, "We've got all you need here to make all sorts of powders!"

Tancred felt his heart beating fast, mixed with something else.
Something new.
A smile on his lips.
A glow all over his skin.
A feeling of happiness deep down in his heart.

So, there were no more frail ankles, the sweet-toothed ate their fill, the grannies had beautiful, peach-colored skin and the Izheer town parties became famous for their fireworks. People came from all over the world to see them. Sometimes little arguments flared up. But reconciliation powder brought miracles. Tancred taught the Izheers the art of making wondrous powders and this art was handed down from generation to generation. He finally got to live a happy life until the end of his days. He was surrounded by loyal friends, and his fame spread throughout the land.

Once upon a time, in the softness and perfect blossoming of a July summer, a butterfly was fluttering at the whim of the wind, under the knowing gaze of the sun. She flew high in the sky, highe ... [+]

The little girl was playing at the edge of the garden. She had decided, on this warm summer's afternoon, that she was going to be an archaeologist. Equipped with her beach bucket, a little plastic ... [+]

Lana had certainly known her share of Christmases! Just how many she wasn’t quite sure. But it seemed to her that the most wonderful of all was still the first one, when she was born.
Fo ... [+]