— Psst! Kiddo!
Mary continued to walk straight on, looking right ahead of her.
— Psst!
Who was that? Where did that whistle come from?
She turned her head. Nobody there. Nothing but the little cold drizzle of rain that misted up her glasses and covered the hood of her raincoat.
— And I can't see anything anyway with this hood! she said to herself shrugging her shoulders.
She glanced around her. Still nothing. The arch of the bridge under the railway line glistened with wet and there was a smell of damp. Mary shivered. Why had she wanted to choose this way on her own? She had tried it once before but that had been with her granddad. He had swiped at the nettles in front of her with his stick and she had told him it was just like a "hobbit adventure."
— Psst!
She turned her head again. Quick! She'd better pull her hood right over and hide inside it so no one could see her. There was a man standing there, not moving, at the entrance to the bridge. A bird, perched on his arm, nodded its head gently in the drizzle that gave a sheen to its colors. 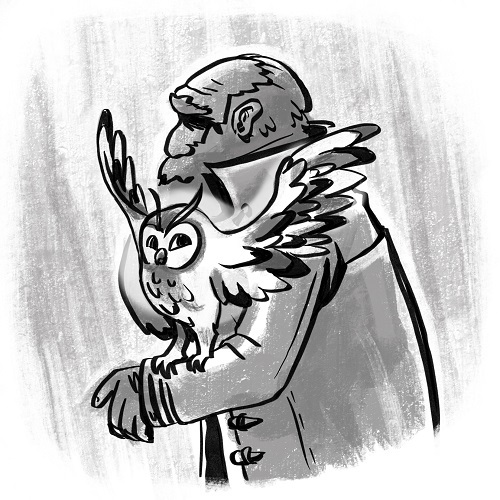 — Hello Mister, she whispered shyly.
Saying something, even if it was in a little voice, gave her confidence. As though Mom was there and hadn't let her set off on her own to school. Or as if Granddad... The man looked a bit like him with his hairy beard hiding his face. He was wearing boots and a raincoat, like the sailor on the cover of the old book Mom had found in the attic and given to her.
— Hello kiddo. My name is Orologio. And what's your name?
The man's lips had not moved, neither had his beard or the end of his nose. So who on earth had spoken?
— Hel-looo, kiddo. Didn't you hear me? What's your name?
The man's face was as immobile as before so instead Mary looked up at the bird which continued to nod its head.
— My name is Mary, she said. Did you give yourself the name Orologio?
— Who else would it be? croaked the bird in a tight voice. You didn't even believe that it was this big man I'm sitting on who did the talking? Do you at least know what Orologio means?
— Yes. Granddad told me. It means clock in Italian. It's a strange name for a bird.
— Orologio, Orrrollodiio... I'm the bird of time, little Mary.
Mary was no longer frightened now, neither of the man-statue nor of this strange bird. But she still wanted to figure things out. After all she'd just turned seven and Granddad had told her that seven is the age to begin thinking properly. Maybe the bird was just a puppet and the man a ventriloquist. She'd seen one of them on TV, on another rainy day like today.
But what would a ventriloquist be doing here, under this bridge?
The bird was looking at her strangely and Mary had the feeling that he was smiling at her. Well, birds do sing and trill when they are happy. She'd never heard anyone say that they could smile as well. Or talk, for that matter. Except parrots. But she'd seen parrots and she knew for sure that this bird was not a parrot. It had different colors and looked more like an owl. So it should be hooting rather than talking. And at that point Mary started to laugh, remembering how her granddad whistled into his folded hands to imitate the sound of an owl.
— Are you a puppet? she asked.
— A puppet! Now where would you get that idea? I'm the bird of time just like I told you before, replied the bird, unfurling its wings.
Perhaps it was because he had stretched out his wings that all of a sudden Mary realized how big he was and how it seemed that the man was shrinking. He was melting, like a snowman in the sunshine or rather he began to dissolve into the misty rain until he became like a figure in the fog.
— What's happening? she cried. I can see right through the man! But... it's Granddad!
She could just make out that it was indeed him.
— Don't be frightened, said the bird and it came to perch on her shoulder.

Mary was surprised at how light it felt.
— I'll always be with you, you know, he murmured in her ear. He asked me to do this for him.
The rain had stopped and there, where a little trace of fog still lingered and where Granddad had disappeared, was a burst of sunshine like a big, warm smile.
— Granddad, she called. Granddad!
But now there was nothing but a heavy silence in which she was choking and struggling to breathe before finally opening her eyes.
It was dark in her bedroom. Mom was there, by her bedside. She turned on a little light that showed on her face some traces of tears.
— Mom, where's Granddad gone?
— Sssshh, said her mom. I already told you, sweetie, he was terribly ill. He's gone up into the sky now, amongst the stars... and into the mist that covers those trees in the wood where you liked to go together...
— And he lives in your heart and in your dreams, whispered the bird. And I'm going to stay with you. Just like he asked me to.

Mary smiled and went back to sleep, whispering a word that her mother could only just make out:
— Orologio.

Every time summer vacation came round, the parents were in the habit of sending their two children to the country, far away from the bustle of the city. So every July, Julien and his little siste ... [+]

The adventurous little mole, whose name was Oscar, lived in a mole-hole at the bottom of the sea with his unadventurous mother and father and his timid little sister who was scared of ... [+]

All Julie did was toss a piece of bubble gum into her mouth, one day. Honey plum-plum flavor. Her favorite. And then...
She blew ONE GUM BUBBLE.
That's it.
It may not sound like much ... [+]