There are some things that are just not possible. Everyone knows that.
If you ask adults – even those who always say stuff like "if you want it enough, you will get it" – if you ask them about a certain dream, a specific thing that you'd like to see happen, then they go:
— But that's impossible. No matter how much you want it.
Leah is eight years old and she already knows that certain things are never going to happen. But because she's still a child she refuses to believe it.
In the small town where Leah lives, the sky is always gray and the people have never seen blue sky, let alone rays of sunshine. Well, actually, they have, but only in the pages of books. So every evening, Leah gets out her picture books and gazes at painted skies. She could tell herself that a sky like that just doesn't exist. But no, that's not what she lets herself believe. Never. The problem with Leah's town is that everyone is sad. From always seeing gray skies, from not even believing anymore in blue skies, nor in happiness, the people have lost hope. Their faces are as gray as the clouds and their smiles are as non-existent as the sun. And if you were to tell them that with a bit of goodwill, everything would feel better, then they would reply:
— That's impossible.
And yet, one nice gray morning, when the sun wasn't shining and everyone was feeling unhappy, Leah raised her eyes up to the sky and caught sight of a tiny sliver of blue that had popped through between some clouds. She smiled.
— I knew it! There really is blue sky. We just need to help it peep out a bit more, and for that to happen we simply push the clouds away!
Leah came out of her house managing to carry in her little arms all the books from her room.
The people passing by asked her:
— What are you doing, Leah?
— I'm making a ladder to reach up to the sky, so I can push the clouds away.
The passersby made fun of her:
— Forget it, Leah, it's way too high up!
But Leah wouldn't listen and shut her ears to these breakers of dreams.
She took the books and built them up into a pile, a huge pile, like a ladder, which she climbed up.
But sadly the ladder wasn't high enough, and Leah could not reach the clouds. 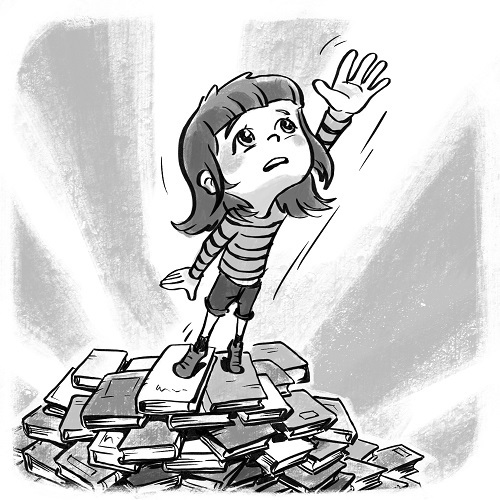 She went back to her room and brought out all the furniture she could find there – her bed, dresser, desk and chair. The neighbors asked:
— What are you up to Leah?
— I'm building a staircase to get up to the sky and push the clouds away.
The neighbors all made fun of her:
— Think again, Leah. You'll never make it!
But Leah refused to hear this.
On top of the pile of books, she builds a staircase of furniture, a big staircase she could climb up. But sadly, it was still not high enough for her to reach the clouds. Leah went back home and emptied out everything in the house: furniture, objects, toys, anything that could be piled up without breaking, anything that was solid enough to climb on.
Her parents asked her:
— What's going on, Leah? What are you doing?
— I'm making a pyramid so that I can climb up to the sky and push the clouds away.
— Stop already, Leah! That's impossible.
The girl didn't listen and kept on constructing an enormous pyramid on top of the huge staircase of furniture, on top of the vast pile of books.
While Leah was climbing, people came out of their houses to watch. Some of them laughed at her but some of them began to comment:
— She's got a lot of guts, that girl. Really brave and sticking to her guns. Which of us could do something like that?
And they all had to agree that it was true. And then when it all came down to it, blue sky was something they all really wanted. So they stopped making fun of her.
When Leah came down this time, because she still couldn't touch the clouds, she didn't understand immediately what was going on. All the people in the town had brought out their furniture, their books, and their belongings to build a huge mountain, so that Leah could reach up and push the clouds away.
While she was climbing up, the people all talked amongst themselves:
— Do you realize that that little girl, Leah, while she's following her dream, has given us all the strength to build a mountain.
And then something truly amazing happened. People felt a growing smile on their faces, and, like a blue sky, they brought color to the village. In their eyes, little flames of hope lit up and that was like thousands of little suns that warmed their hearts and no one noticed anymore that the sky was gray.
Leah, on the other hand, had not managed to reach the clouds. The mountain was still not tall enough. When she came down again, her heart felt as heavy as a great big storm cloud ready to burst. Just as if the gray sky had won the match and extinguished her hope. But then when she got to the bottom she found something unbelievable on the faces of all the people – happiness! They all had a huge smile on their faces and in their eyes there was a real sparkle, glimmering like a sky with no clouds. And she understood that they had begun to believe in happiness.
So, in order not to spoil things for them and also because adult dreams should never be shattered, she did not tell them that touching the sky and pushing the clouds away... well, it's just not possible.

The little girl was playing at the edge of the garden. She had decided, on this warm summer's afternoon, that she was going to be an archaeologist. Equipped with her beach bucket, a little plastic ... [+]

"Maroussia, don't go too far from the house!"
The little girl shrugged. The old lady was calling to her from the cottage steps, waving her stick like when she rounded up the goats at nightfall ... [+]