Bashir looked at the sunlight coming in through the window. The weather was magnificent, but he was forced to wait here, in the shadow of the dining hall of Mimosa Boarding School.

It was a peaceful place. From time to time a gust of wind would move the main door with a muffled creak. A young school monitor was also waiting a little further off. Apart from the two of them, the grounds were empty. One by one, friends and staff had all left with their families.

Where are my parents? wondered Bashir. Have they forgotten me? 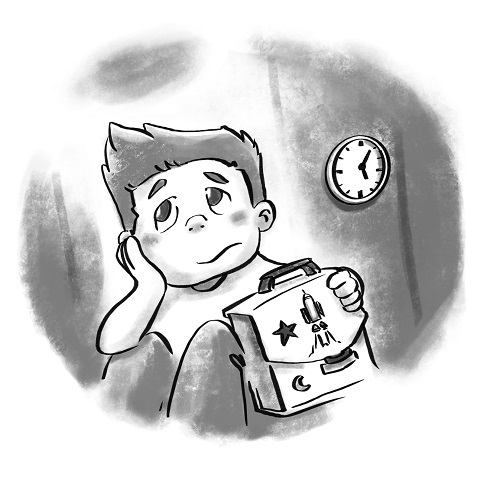 He gripped his astronaut themed backpack.

"Are you alright?" asked the monitor, coming up to him. "Are you waiting for your parents?"
"Yes," he replied. "What about you?"
She smiled sadly. "Oh, I have nobody to wait for any more. But you'll see, I'm sure your parents will be here soon!"
"I hope so," said Bashir. "I'm starting to get hungry."
"You kids are always hungry! Look at the sky," she said to change the subject, "a star's just come out!"
"I see it! Isn't it a bit early for stars?"
"It must be an early morning star!"
"It's huge!" remarked Bashir, fascinated.
"Yes. And it's getting bigger and bigger... Watch out!"

The girl crouched down to the ground, pulling Bashir to safety as the star crashed onto the playground!

The smoke cleared and Bashir and the girl stood up, covered in dust, and found themselves in front of... a rocketship! Its door opened and two astronauts stepped out. Bashir recognized them immediately.

"Mom! Dad!" he shouted.
"Sorry we're late," said Mom. "There were traffic jams all around Jupiter!"
"Yeah," Dad agreed. "We had to hop on a meteor to get here!"
"Let's get going Bashir! The gaseous seas on Trappist-1 are at their best at this time of year and you love swimming so much!"
"I'm coming!" exclaimed Bashir, picking up his schoolbag. He turned to the girl. "Are you coming with us?" he asked her.
"Why not?" she said with a smile. "I've never seen the sea!"

And all four of them took off to the stars.

Justine and Margie had decided to take the lead in the revolt. They were discussing in muttered tones in their little brother Charlie's room. As he was only two years old, he would not be capable of ... [+]

It was dressing-up day in school soon, and Daisy and Mummy were talking about Daisy's costume."What would you like to go as?" asked Mummy. She held up a beautiful dress. "A princess?"Daisy shook he ... [+]

My name is Noucha, I'm eleven years old and my favorite superhero is me!
Everything in my life is magical, epic and fantastic. I live in the most beautiful house in my neighborhood even though ... [+]